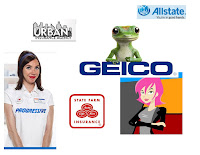 Does it seem like every other commercial is for Car Insurance? At first, I thought maybe the fact that I sell Car Insurance left me “Hyper-aware” of Auto Insurance commercials, but it is not my imagination; auto insurance advertising has skyrocketed from $600 million in 2003 to more than $1.7 billion in 2007. Insurance companies spending has continued to increase throughout 2008 and again in 2009. In fact last year Geico alone spent more advertising car Insurance, than the total industry spent in 2003. State Farm and Allstate have dramatically increased Spending over the past year unwilling to give up market share to Progressive and Geico.

The result of all of this spending is a public that is watching and endless string of commercials from a dozen car insurance companies, each claiming to be some $500 cheaper than any other company. As a log-time agent selling car insurance, two things are quite clear:

1. Consumers are paying for all that advertising through higher Car Insurance rates.

2. Every company can’t be the cheapest insurance company.

It should come as no surprise, that if an insurance company spends hundreds of millions of dollars per year on advertising, millions more vanity sponsorships, plus millions of dollars in executive bonuses- those costs will get passed down to consumers.
At Urban Auto Insurance, there are no marble floors and certainly no seven figure salaries. Our lower overhead is passed on to policy holders through lower rates.
I am always amazed by insurance companies claims that their policies will save people an average of over $400; because, At Urban insurance the average cost of a policy is only $426.
Clearly “Average savings” are based on only those customers who switched to company “X” and then reported that they saved money. Customers who got a quote from company ”X” and found the rate higher, and did not change carriers or switched but didn’t save money are not counted when compiling their average.

Get a quote from Urban Insurance today, then feel free to turn down the sound next time you see a insurance commercial.